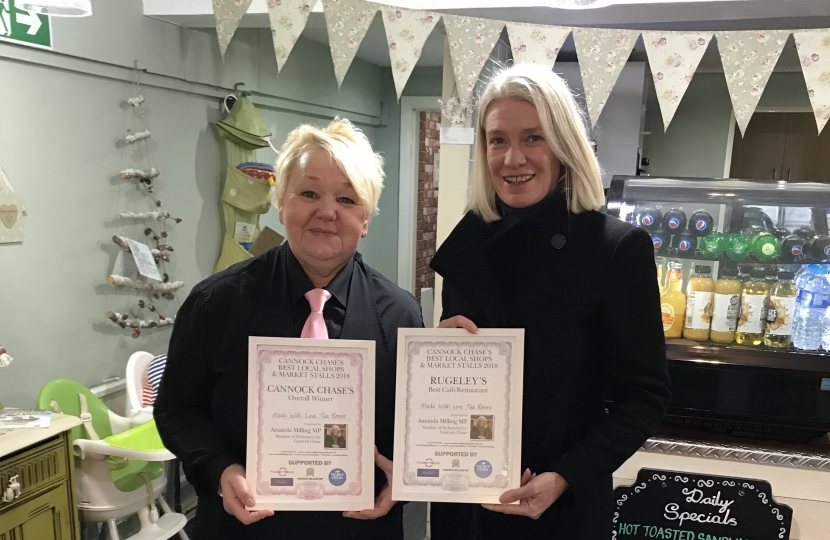 Over five thousand votes were cast in the competition organised by the Cannock Chase MP. The competition saw local businesses battle it out to be crowned the public’s favourite independent retailers in Cannock, Rugeley and Hednesford.

The competition which is now in its fifth year, saw nine awards up for grabs – best local shops, best market stalls and best cafés/restaurants, as well as the overall winner award for the retailer gaining the most votes in any category. The winners were publicly announced on 1st December 2018 as part of Small Business Saturday.

The overall winner of the competition was Rugeley's Made With Love Tea Rooms, which beat all other category winners by securing the most votes in total.

Rugeley market’s Meat To Please You managed to defend its title for the fifth consecutive year. With Lachmere, Made with Love Tea Rooms, The Rug Stall, Bella’s Coffee House and Jabu Hair Studio all defending their titles. There were two new winners this year - La Vie en Rose Floristry and Mim’s Mom’s Coffee Bar in Cannock.

Amanda said: “I would like to congratulate all of this year’s winners. Over five thousand votes were cast and every part of the high street was entered into the competition. As ever the competition was fiercely fought. A huge well done must also go to Made With Love Tea Rooms who was the overall winner and set a new record for the number of votes in this competition.”

Rugeley Market – Meat to Please You