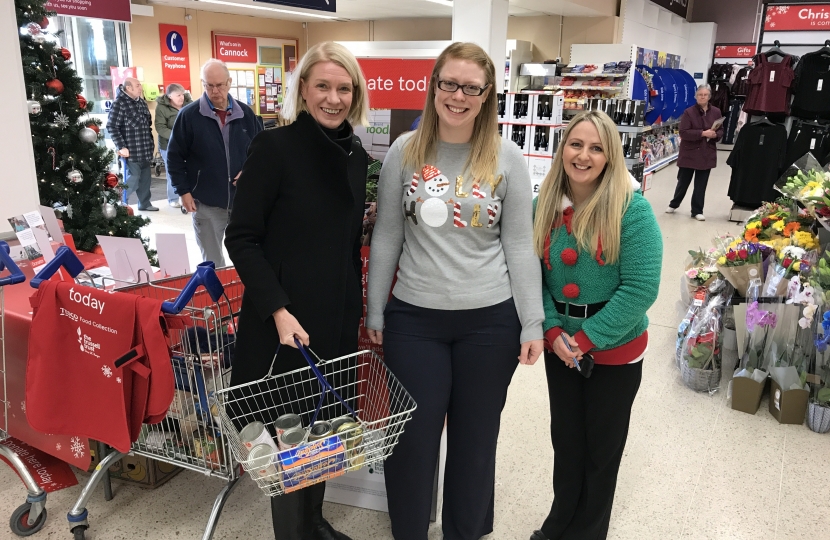 Cannock Chase MP, Amanda Milling, has thrown her support behind a nationwide food collection to help people who find themselves in need this Christmas.

From Thursday, November 30 to Saturday, December 2, more than 2,600 Tesco stores across the UK took part in the annual Food Collection, which encourages shoppers to donate long-life foods to help charities FareShare and The Trussell Trust’s foodbank network to give food and support to people who might otherwise go hungry this Christmas.

Amanda Milling visited the Tesco store in Heath Hayes and Hednesford to support the appeal, which last year helped to collect 3.6 million meals nationally for people in need.

The food donated to foodbanks in The Trussell Trust’s network is given in emergency food parcels to people referred to them because they cannot afford to feed themselves and their families. Food donated to FareShare is distributed to charities and community groups who use it to provide meals for vulnerable groups such as isolated older people and those in homeless shelters.

More than 43 million meals have been donated to the food charities by generous Tesco customers since the scheme began, and the supermarket is hoping that shoppers will be just as generous this year.

Amanda Milling MP said: “At this time of year it’s good to think of others, and I would like to thank all those customers who were so generous over the weekend. These donations will make a real difference to people in need of food this Christmas.”

Lindsay Boswell, CEO at FareShare said: “For charities doing their best to feed some of the most vulnerable over the Christmas period, these donations make a huge difference. “

Samantha Stapley, Operations Manager for The Trussell Trust said:“Trussell Trust foodbanks across the country will be doing all they can to provide emergency support so people don’t go hungry - but we need to make sure we’re prepared for what could be our busiest December yet. During every Food Collection we’ve been humbled by the staggering generosity of Tesco customers, store colleagues and volunteers. Your generosity will help stop hunger this Christmas.”