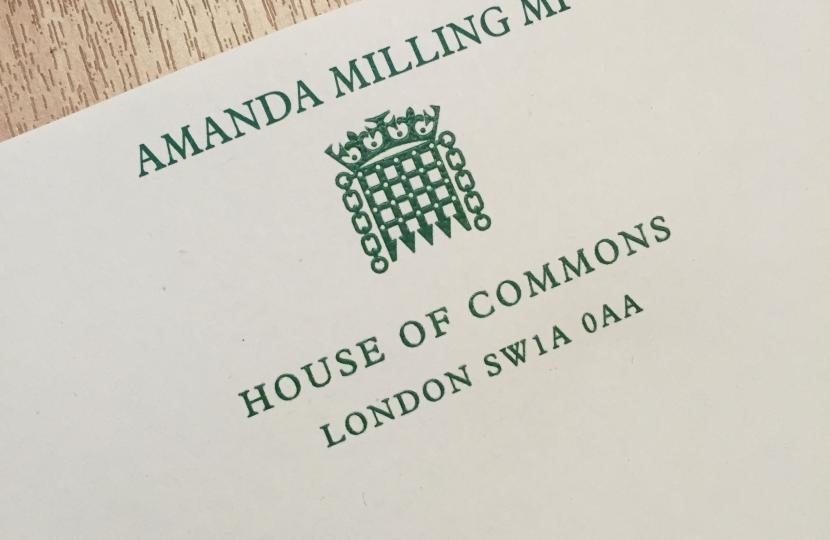 Amanda Milling, Member of Parliament for Cannock Chase, has called for a Parliamentary debate on the issue of illegal waste.

In a recent debate, the Cannock Chase MP called on the government to set aside time in Parliament to debate the issue of illegal waste sites and fly tipping, following her calls to review and tighten environmental laws.

Citing local residents' experience as 'horrendous', Amanda Milling has been seeking a review of regulations, enforcement action and the introduction and implementation of stricter penalties following a fire at an illegal waste site in Slitting Mill, near Rugeley.  With illegal waste dumping becoming an increasing problem nationally, as well as in Staffordshire, the Cannock Chase MP believes it is time for the government, the Environment Agency and local authorities to step up action to tackle the issue.

Staffordshire has seen two large fires at illegal waste sites in recent months. The first was a fire at a farm in Slitting Mill which saw 1,000 tonnes of illegally dumped waste burn, taking over two weeks for Staffordshire Fire and Rescue bring it under control.  The waste was then capped with soil but continues to burn underneath the stack six months on.  More recently there was a fire at Milton, Stoke-on-Trent, centred on a building containing 1,500 tonnes of recycled plastics. According to the Environment Agency, the company, Hanbury Plastics Recycling (Stoke) Ltd, did not have an environmental permit and had been issued with legal notices to clear waste plastics.

Fly-tipping has also been well documented and publicised recently and is causing much local concern with 471 cases of fly-tipping in Cannock Chase last year, according to figures released by the Department for Environment, Food and Rural Affairs.

Amanda Milling said: “The Slitting Mill fire was horrendous for local residents and the cost of managing it has been a significant pressure for the fire service.  Six months on it is still burning underneath the soil cap and continues to emit smoke.  I want to see local authorities and agencies to make sure they are using all of their powers to tackle illegal waste dumping and where it is required legislation tightened to make it harder for such sites to spring up.  Illegal waste sites are a problem in Staffordshire and present a real fire risk, but we are not alone, this is an increasing issue nationally and a significant cost to the tax-payer."

She added: “Illegal waste sites are just one part of them problem, fly-tipping is just as serious and can result in rural roads, industrial estates and many other places becoming a dumping ground for irresponsible individuals. We need to step up moves to address these issues.  On the one hand we need to make sure legalisation is tightened but we also need to ensure locally the laws are used."

The Cannock Chase MP has been working with Staffordshire Fire & Rescue Service and other agencies to learn lessons from the incident at Slitting Mill, adding:

"The fire at Slitting Mill highlighted numerous issues.  The fire should never have happened in the first place, begging questions as to whether agencies were being sufficiently robust in dealing with the illegal waste dumping in the first instance and previous fines clearly hadn't acted as a deterrent. When the fire did occur it was clear that the Fire Service were limited in what they could do as there were conflicting priorities from the other various agencies involved.  We need to learn lessons need from this in terms of ensuring a co-ordinated, effective and efficient response. This is one of the many issues that I have been working on with the Fire Service, other agencies and government ministers over the last few months.

The Cannock Chase MP is currently seeking to secure a debate in Parliament to raise the profile of the problem and urge on Ministers to review policy.