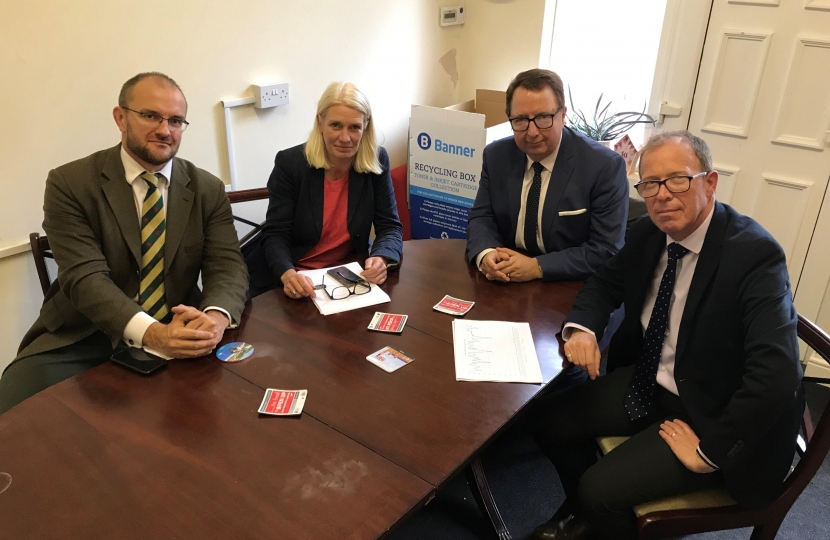 Amanda Milling, Member of Parliament for Cannock Chase, has met with representatives of West Midlands Trains and Network Rail to discuss the ongoing problems on the Chase Line.

The electrification of the Chase Line, which was completed in December 2018, was supposed to deliver an improved service after a new electric train timetable was introduced. However the Cannock Chase MP has expressed her disappointment that passengers have experienced a number of service disruptions, such as seriously delayed and cancelled trains, since the introduction of the new timetable in May 2019.

The Cannock Case MP also detailed some of the horrendous stories of the impact that the lack of service reliability has had on her constituents’ work and home lives.

Amanda Milling MP said: “I made it clear to West Midlands Trains and Network Rail that the Chase Line is essentially a commuter service between Rugeley and Birmingham. It is a line where the vast majority of passengers use the service to get to and from work. As such, it needs to be reliable and I am concerned that it is so often the same group of commuters who are finding themselves on delayed or cancelled trains, or on trains that terminate at Hednesford rather than going through to Rugeley. “

She added: “Delayed trains are seeing people getting to work or home late.  Cancelled trains are causing similar delays and trains terminating at Hednesford are seeing people stranded there, unable to reach their destination or unable to start their journey in Rugeley. This is not something that is acceptable, let alone something that should be repeated week after week. I have urged West Midlands Trains and Network Rail to build more flexibility and contingency into the system to cater for problems that come about from issues elsewhere on the network, especially in and out of London Euston.”

Both West Midlands Trains and Network Rail informed the MP that they are well aware of the problems and they have established a special task force with the specific brief of looking at ways of addressing the reliability issues on the Chase Line. Their task force is looking at a number of different options to address the underlying causes of the problems, both in the short and long term. West Midlands Trains committed to communicating to passengers any decision to terminate trains as early as possible and have introduced temporary signage at Hednesford station regarding the bus replacement service.

The Cannock Chase MP added: “Whilst I welcome some of the measures being taken to assist passengers when there are issues with the service – for instance, better passenger communications – the fundamental reliability of the service needs to be addressed.  The electrification of the Chase Line was supposed to deliver an improved service; sadly, this is not what passengers are experiencing.  We desperately need the underlying problems to be resolved so that passengers can enjoy a stress-free journey.”