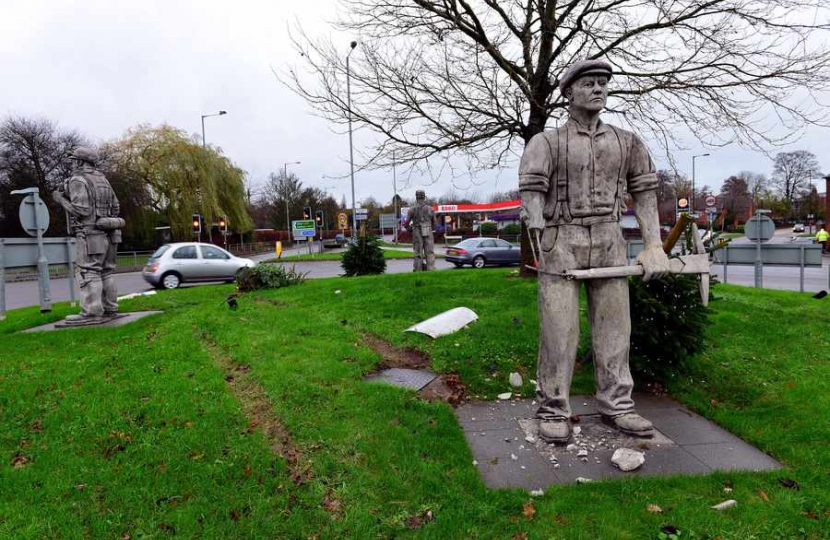 Amanda Milling, Member of Parliament for Cannock Chase, has raised the damage caused to the Rugeley Miners Memorial with the Government.

In September, a new memorial to the 115 miners who were killed underground while working at the Lea Hall and Brereton Collieries was unveiled in Rugeley. The request for the memorial originally came from Lea Hall and Brereton Collieries Memorial Society in 2011. The memorial is four imposing miners statues created by Andy De Comyn. The four nine foot sculptures located on Globe Island in Rugeley are made from concrete resin and weigh between 1500-2000kg. Recently on a Saturday night, one of the four statues was severely damaged when a car crashed into it and fled the scene. The damage has, rightly, caused a lot of upset in Rugeley and an appeal has been made for anyone with information to contact Staffordshire Police.

Speaking in the House of Commons, Amanda Milling MP asked the Rt Hon John Whittingdale MP, The Secretary of State for Culture, Media and Sport to condemn the actions of the callous driver.

Amanda Milling said: “I had the honour and privilege to attend the unveiling on the memorial.  The damage that has been done is just awful. It is so upsetting to see the damage caused, not only because it is in memory of the local miners who died, but because so many people and local groups like Lea Hall and Brereton Collieries Memorial Society worked so hard to make the project a reality.”

Rt Hon John Whittingdale MP, The Secretary of State for Culture, Media and Sport said: “I entirely share my hon. Friend’s feelings. I was concerned to hear about the damage to the memorial to the miners who lost their lives, especially as it came so soon after more than 2,000 people lined the town’s streets for its unveiling in September. I am sure that the whole House will join my hon. Friend in condemning the actions of the person responsible."

He added that: “I can tell her that my Department administers the memorial grant scheme. If a registered charity is responsible for the care of the memorial, it will be able to benefit from a refund of VAT paid on repair work.”

Amanda welcomed the support available from the refunding of VAT and reminded the public that anyone with information should come forward saying, “The damage to the car would be very obvious, so please do the right thing and notify the police. I know everyone looks forward to the statue being restored to it’s former glory.”

Anyone who may have witnessed the crash should call Staffordshire Police on 101, quoting incident 91 of November 28, or call Crimestoppers anonymously on 0800 555 111.