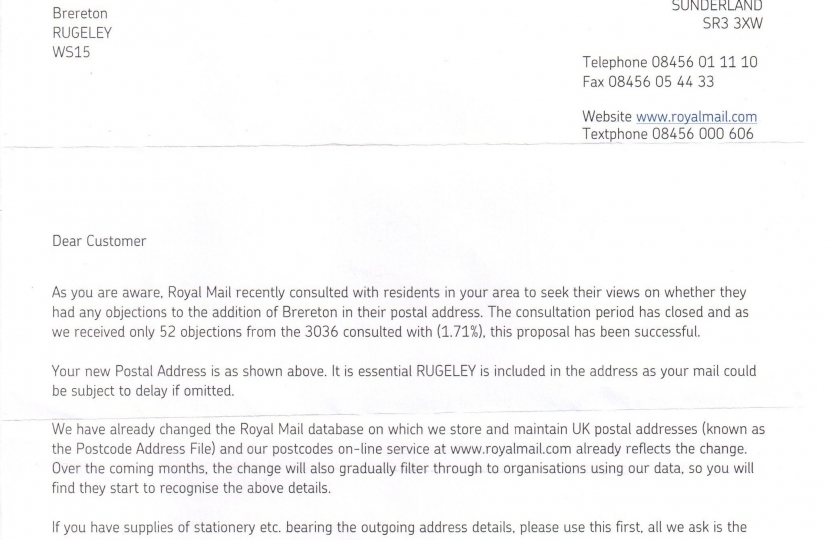 Amanda Milling, Member of Parliament for Cannock Chase, has welcomed Royal Mail’s decision to include Brereton in the postal address system.

Following calls from both local residents and Brereton and Ravenhill Parish Council to keep Brereton’s identity alive, Amanda Milling joined the campaign to urge Royal Mail to recognise Brereton in the official postal address for all houses in the village.

Previously, Royal Mail, who control the postal address system, listed only 47 properties in the parish with Brereton in the address, despite there being more than 1,000 houses in the village. Following the calls by local residents, Brereton & Ravenhill Parish Council and the Cannock Chase MP, Royal Mail carried out a public consultation and the change was backed by an overwhelming majority of residents. The change to the official address to include Brereton has now been implemented by Royal Mail.

Amanda Milling said: “As a resident of Brereton I understand how the village has a very strong identity and community spirit and residents are incredibly proud of this.  I am very pleased that Royal Mail have agreed to recognise Brereton’s unique status and will include ‘Brereton’ in the postal address for all houses in the village.”

Residents of Brereton recently received letters from Royal Mail confirming this change.  Whilst Brereton has been included in the address it is essential that Rugeley is included in residents’ address too.  If omitted, mail could be subject to delay.

The Cannock Chase MP and Brereton resident said: “Whilst it is fantastic news that Brereton has been recognised and will be included in the official address for all houses in the village, it is important that residents continue to include Rugeley and their postcode too, otherwise they may find that their post is subject to delays in being delivered.”