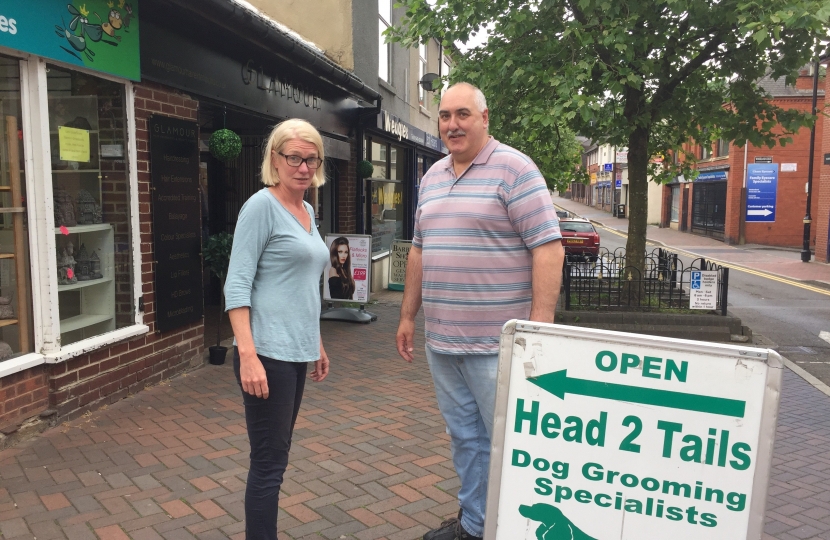 Amanda Milling, Member of Parliament for Cannock Chase, has launched a petition against new charges that have been introduced by Labour-led Cannock Chase District Council. The council recently started charging high street businesses in Cannock, Hednesford and Rugeley who display A-boards or have tables and chairs outside their business. These charges imposed on businesses in Cannock, Hednesford and Rugeley town centres has seen the Cannock Chase MP’s office flooded with angry complaints.

The charges have seen some independent cafés stop offering outside seating and many other businesses bring in their A-boards or other displays from the street. The Cannock Chase MP believes that the fees are anti-business and are damaging the fabric of our high streets.

Amanda Milling has launched the petition in a bid to get Labour-led Cannock Chase District Council to reverse this short sighted tax on local businesses, calling on them to scrap the charges before they damage our local town centres.

Amanda Milling MP said: “I have been flooded with angry calls over the Labour-led District Council decision to bring in new charges on our town centre businesses.  The charges could see some small independent cafes having to pay as much as £500 a year to have tables and chairs outside their shop, as well as other independent traders having to take their displays and signs indoors. These charges are anti-small business and are in danger of undermining the fabric and energy of our town centres.  At this crucial time for the high street, we need to support our town centre businesses, not burden them with additional costs.”

The Cannock Chase MP’s petition was launched on Friday 1st June and has already attracted over 1200 signatures. It will be presented to Cannock Chase District Council in the hope they will abolish the punitive charges against small independent businesses.

She added: “The number of people who have already signed the petition shows the strength of feeling about our town centres and support for our local independent small businesses.  Our town centres is an issue which is commonly raised with me and we need to do everything we can to support our local small businesses, not tax them into closure.  I hope that as many people as possible will sign this petition so we can show the Labour-led District Council the strength of feeling about this disastrous policy, with a view to getting them to reverse it.”