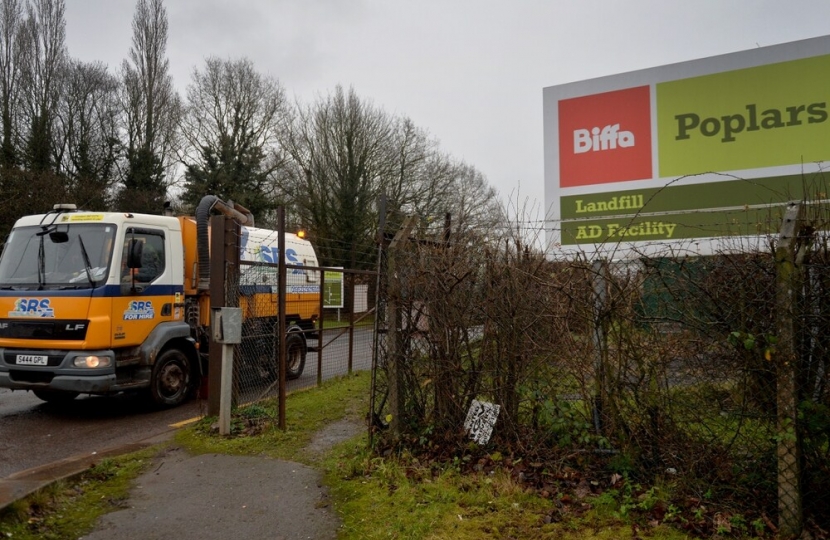 I am still receiving many complaints about the smell from Poplars Tip.

The last few days have been very bad in places and it is causing real distress to people. The issue has rumbled on for months and people have contacted my office reporting various issues, including house sales falling through, the inability to leave homes because of the smell, and children waking up in the early hours because the smell is so strong, getting into every room of the house.

I am under no illusions how serious this matter is and I have been in contact with Biffa and the Environment Agency again today, as well as also contacting Public Health England about the matter. When I met Biffa and the Environment Agency at Poplars Tip a couple of weeks ago, a plan was agreed by Biffa to cap the waste, which is believed to be causing the problem, with plastic sheeting.

This work is ongoing and Biffa expect it to be fully completed by early February. They have also increased efforts to capture gas leaking from the landfill and patch any other leaks elsewhere on site. Hopefully the plastic sheeting will resolve the issue, as it has worked elsewhere.

The Environment Agency have been going door to door delivering an update to residents in the immediate area of Poplars Tip. You can read that here - https://consult.environment-agency.gov.uk/…/poplars-cannoc…/

I am meeting again with Biffa and the Environment Agency on site once the work has been completed to discuss the situation further. In the meantime, I will continue to raise complaints on behalf of residents with Biffa.

The Environment Agency are encouraging people to continue to report incidents with smells. To do this, call the free 24 hour incident hotline on 0800 80 70 60. When reporting odour they will ask you to assess the strength of the odour on a scale of 0 to 6. To help with your assessment, an explanation of this scale is as follows:

0 – No odour
1 – Very faint odour (need to inhale into the wind to smell anything)
2 – Faint odour (you can detect an odour when you inhale normally)
3 – Distinct odour (there is clearly an odour in the air as you leave your car or enter the area)
4 – Strong odour (a bearable odour but strong, you could stay in the area for some time)
5 – Very strong odour (unpleasantly strong, you will want to leave the area quickly)
6 – Extremely strong odour (likely to cause nausea and a strong need to remove yourself from the odour immediately)

Picture credit to the Express and Star.

Amanda Milling, Member of Parliament for Cannock Chase, has welcomed a £54,177,110 Government investment in schools across Cannock Chase – the largest funding boost in a decade.