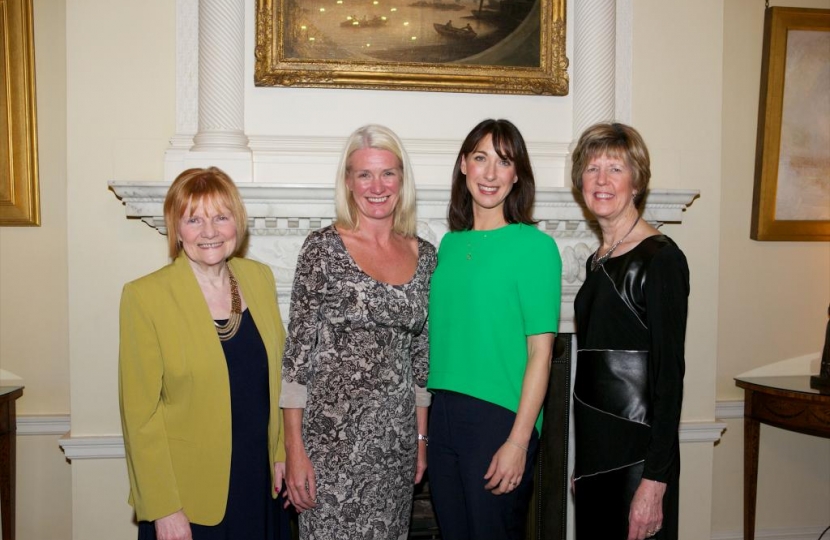 Conservative MPs and parliamentary candidates nominated two guests from their constituencies who they considered to be 'charity champions' to attend a reception in their honour at 10 Downing Street.

Amongst other things Pat Stanley volunteers every week in Cannock Chase Hospital for the Stroke Association and runs the local Tuesday Stroke Group. This group meets on a monthly basis and is an opportunity for those who have suffered from a stroke and their family, friends and carers to meet.

Through Cannock and District Soroptimists Trish Mellor works to support women in many ways, in particular, to provide information about and to raise money for local women’s charities, the Pathway Project and Staffordshire Women’s Aid. Trish also volunteers on a regular basis at St. Giles Hospice and is a committee member of Cannock Friends of St Giles.

Samantha Cameron said: “It was a privilege to meet Pat Stanley and Trish Mellor at 10 Downing Street. Their amazing work is changing the lives of individuals and families across Cannock Chase and it was an honour to celebrate their work at the reception for charity champions.”

Amanda Milling said: “I was thrilled to have the opportunity to nominate Pat and Trish for this reception to recognise all the hard work that they do for various groups in the community and, in particular, their voluntary work for local charities.

Pat Stanley said: “I was a real privilege and wonderful experience to visit 10 Downing Street and also meet with and have a chat to Samantha Cameron. She was very interested to hear about our local charities and the work that we do.

Trish Mellor said: “It was an absolute honour to be given such an opportunity, something I hadn't even considered as being a possibility. I enjoyed every moment - being in such an historic building, meeting Samantha Cameron and also the other people involved in charity work from across the country.”