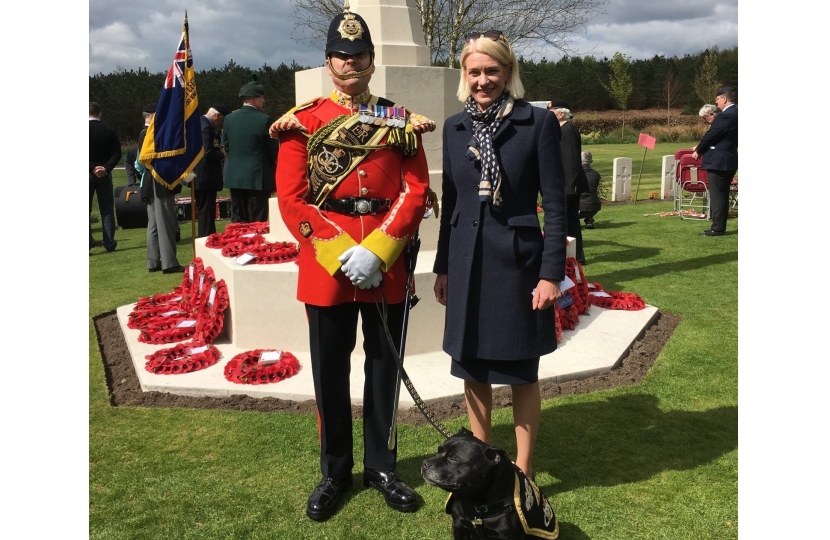 Cannock Chase MP, Amanda Milling, has saluted the Staffordshire Regimental mascot in Parliament a year after he was crowned the “Paw-blic” favourite in the 2016 Westminster Dog of the Year competition.

Speaking in Parliament the Cannock Chase MP praised the work undertaken by Sgt Watchman V and his handler, Greg Hedges, promoting the Staffordshire Regimental family and wider armed forces causes across the county.

Watchman was crowned the Westminster Dog of the Year “Paw-blic” vote winner in 2016 and the Cannock Chase MP was keen to salute his work raising the profile of the military community over the past year.

Watchman is a regular attendee at military parades, ceremonies and remembrance events with his handler giving up much of his free time to undertake his role. This enables Watchman to also support a number of military causes including the Royal British Legion Poppy Appeal, RSPCA and many other local charities.

Amanda Milling MP said: “I am a big fan of Watchman and I am always impressed by the work he and his handler do to support local regimental history and many local charities. This week saw a new “Westminster Dog of the Year” crowned, however Watchman was a real hit last year and holds a position steeped in history. We are so lucky to have such an iconic, hardworking and loved mascot as our symbol, and I wanted to share my admiration in Parliament on the anniversary of his achievement in the 2016 Westminster Dog of the Year competition.“

Sgt Watchman V is the fifth mascot to bear the name Watchman and the latest in a line of mascots stretching back to 1882.