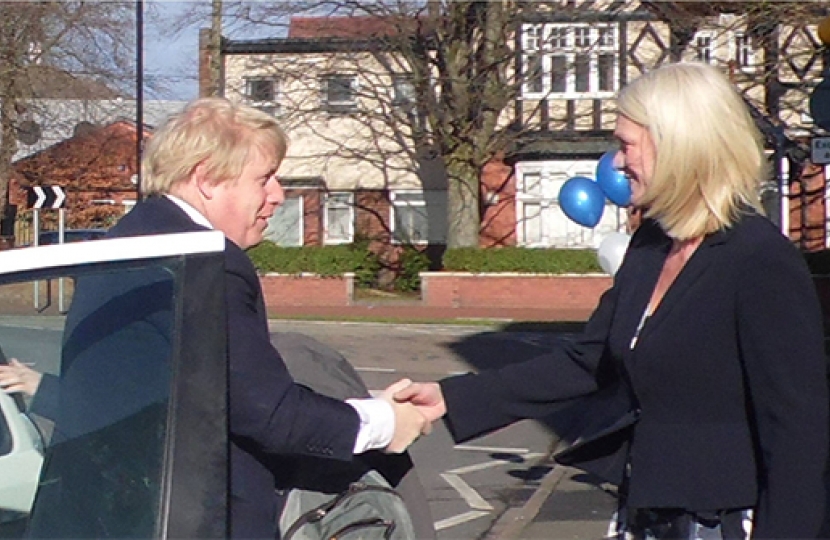 The country's most famous blond bombshell dropped in to give a speech for a special pancake day lunch. Mr Johnson then toured the tables of the Premier Suite in Cannock's town centre, chatting to local Conservative Party supporters - and posed for scores of selfies.

Mr Johnson said: "Battlegrounds like Cannock Chase are essential for us in the forthcoming General Election so we return a strong Conservative government. This is the only way we'll keep delivering our long term economic plan, which is benefiting local businesses and hardworking people round here.

"Amanda Milling will make a great MP and it's great to see so many people turn out to support her during her pancake lunch. I now want to see all these supporters become a legion of Amanda's foot soldiers, with their boots on the ground pounding the pavements for this party between now and May 7th.

Amanda Milling said: "Being born and bred in Staffordshire, it's an honour for me to be fighting to win Cannock Chase again for the Conservatives.

"This government has shown it can deliver, with 38,365 people having more money in their pay packet every month because they're paying less income tax. There are also nearly 2,000 fewer people unemployed than in 2010. But clearly there is still more work to do.

"Having support from Boris was crucial to rallying the troops for this battle. Whether it's stuffing envelopes, getting on the phones or stomping the roads of Cannock, Rugeley or Hednesford, I now need all our friends to get out and help me win this fight."