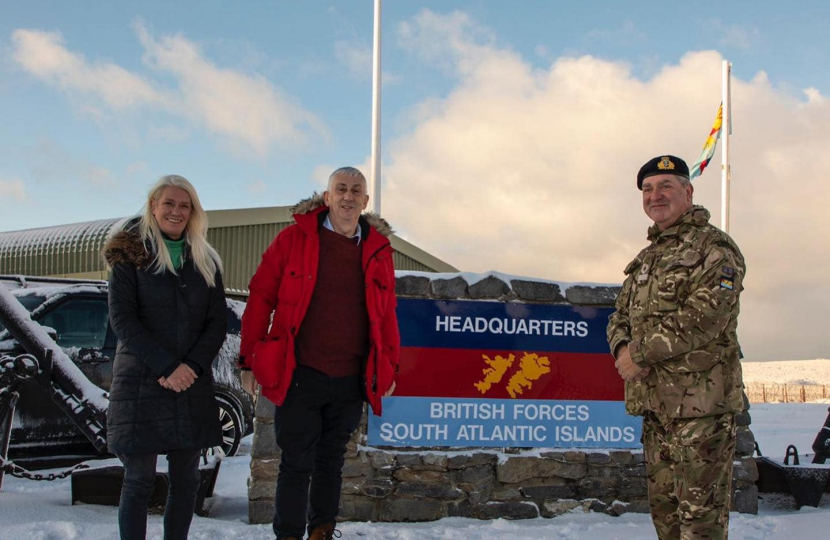 I wholeheartedly salute the heroism of those who served in the Falklands War, and especially the 255 British troops who died in the conflict. Their bravery ensured the people of the Falklands Islands can be justly proud of the prosperous and secure future they have built for their islands since 1982.

I have been heartened by the series of events which have been planned by the Royal British Legion in the run up to Liberation Day. I was especially proud that these events culminated in a special service at the National Memorial Arboretum in Staffordshire on 14 June.

As the Minister for the British Overseas Territories, I recently visited the Falkland Islands and attended the 40th anniversary of the liberation of Goose Green and laid a wreath in honour of those who gave their lives in the battle.

It was brilliant to see what's been built in the last 40 years – and to see their thriving economy, diverse communities and how the islands have reversed population decline. What's not changed is the islanders' determination to decide their own future - a cause that everyone should support.

In Cannock Chase I have been very concerned to read social media reports about the rise in anti-social behaviour on West Midlands Trains services, particularly on the Chase Line.  Passengers should feel safe and comfortable on public transport and I am saddened to hear that this has recently not been the case for several of my constituents.

Please be assured that I have flagged this issue directly with both West Midlands Trains and the British Transport Police to request that urgent action is taken to help address this problem.

As ever, please do not hesitate to raise any issues with me by telephone on 01543 877142, via e-mail at amanda.milling.mp@parliament.uk or in writing to 11a Market Street, Hednesford, Cannock, Staffordshire, WS12 1AY.

Her Majesty The Queen's Platinum Jubilee

It has been wonderful to see so many of you enjoying the Platinum Jubilee over the weekend. And I have been proud to see all the Union Jacks and Jubilee flags decorating our high streets and houses.