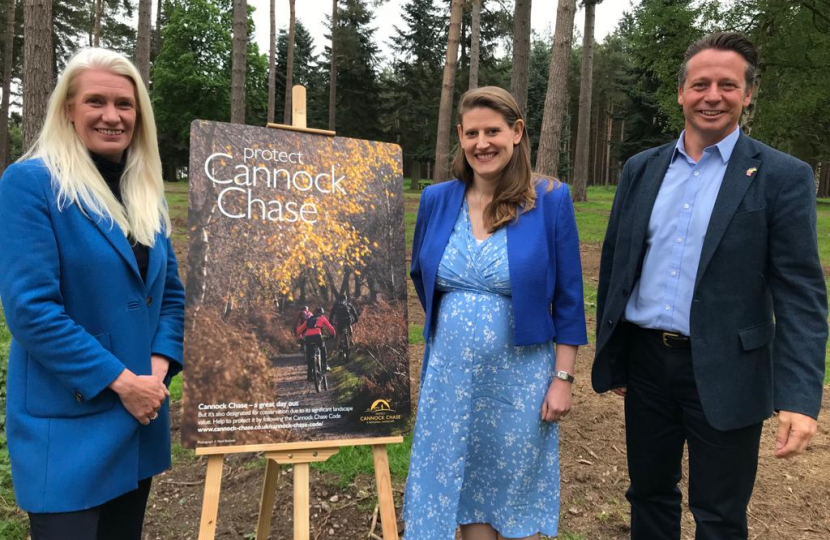 Cannock Chase Forest is the location for the mountain biking event in the Commonwealth Games 2022 but the trails are now open for everyone to enjoy.

The cycling improvements have been made possible by funding and support from Sport England along with British Cycling, Birmingham City Council, Staffordshire County Council, Cannock District Council and the Birmingham 2022 Commonwealth Games Organising Committee.

Commenting, Nigel Huddleston MP, Sports Minister, said: “It was a pleasure to join my fantastic colleagues Amanda and Theo at the launch of Forestry England’s brand new mountain bike trails in Cannock Chase. They are both great advocates for the Commonwealth Games. Not only will the trails be used for the 2022 Commonwealth Games but the site is levelling up access to cycling facilities for all and will leave a lasting legacy for the community.”

Amanda Milling MP, said: “It was brilliant to welcome the Sports Minister to Cannock Chase to see the fantastic work that’s been done by Forestry England and to see the site of the mountain biking for the upcoming Commonwealth Games. It was great to see cyclists making use of the new trials and a local group using the Pedal and Play trail. The trails are open now and everyone across Cannock Chase and beyond are able to enjoy them.”

Theo Clarke MP, said: “I was pleased to join the Sports Minister and my neighbouring MP Amanda Milling at the official opening of Forestry England’s new mountain bike trails in Cannock Chase which will be used for the upcoming
Commonwealth Games. It was great to see the fantastic new facilities for kids on the Pedal and Play trail. I’m delighted that Staffordshire is hosting the mountain biking competition this summer and encourage everyone locally to get involved and support the Games.”